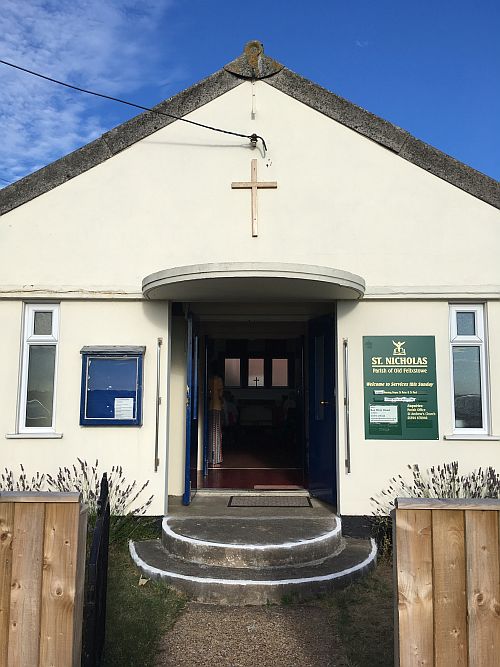 St Nicholas’ original building was built in 1878, as the Parish church was over a mile away and not the easiest to access on the dirt tracks via Ferry Road. It has traditionally served the small hamlet of Felixstowe Ferry and even up to the turn of the century has been called “the Ferry Church”, whilst now is more often referred to as St Nicholas at the Ferry.

In 1926 the Ferry church was also the Schoolroom serving the isolated geographically hamlet of Felixstowe Ferry.

In 1943 a bomb dropped on the nearby Harbour Villas housing causing damage to the Ferry church which was finally rebuilt in 1953 (after devastating Floods) to reserve the community.

The current building continued until 2003 when the Millenium project finally saw the introduction of toilets nicknamed affectionately “the Milleniloo”!

The Ferry and its’ church has always provided a welcome to the town and provides another facet of Parish life despite there being only a few of the original Ferry families attending and is held with fondness by many over the years as a centre for the community life.

We use cookies on our website. Some of them are essential for the operation of the site, while others help us to improve this site and the user experience (tracking cookies).

You can decide for yourself whether you want to allow cookies or not. Please note that if you reject them, you may not be able to use all the functionalities of the site.